IRKit service will stop soon.
Please check https://maaash.jp/2022/04/deprecating-irkit/ in Japanese or in English

When you want to take a photo, chat with someone, you choose an app from AppStore. A simple focused app, a beautifully designed app, a full featured app, there're plenty of apps for you. But there were not much options when you want to control your home electronics.

You know you'll use a smartphone app to control your home electronics. IRKit is a device that helps to bring that future. 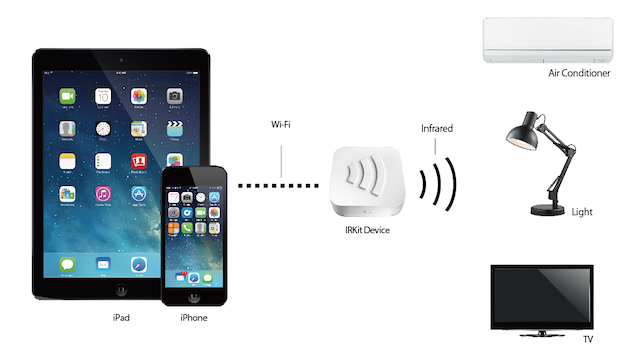 You can create apps for example that does:

IRKit is a Arduino derivative Open Source hardware.
Open pins are pulled out, so you can add some components like temperature sensor or brightness sensor and modify IRKit's firmware, write it into IRKit using Arduino IDE to make it more smart.

So, what did you hate about your remote controller?
How would you like to control it?

It's as simple as: After you get IRKit's IP address, access it's HTTP API.
* If you use a HTTP client that uses Bonjour to resolve .local hostnames, you don't need above step.

IRKit clear's it's IR signal memory after responding to GET /messages request.
So you won't GET the same IR signal twice.

Get a clienttoken
Pass clienttoken over to next request: POST /1/keys to get clientkey and deviceid.
See IRKit Internet HTTP API for details.

To pass those Wi-Fi information to IRKit, you first connect to IRKit's own Wi-Fi accesspoint.

Serialize Wi-Fi information along with the devicekey, and put the serialized string in the request body to POST /wifi.

After POST /wifi responds with HTTP status code 200, request against POST /1/door to check if IRKit successfully connected to Internet.

When using IRKit's Internet server, you'll need following 2 request parameters.
These are used to know who sent this request, and which IRKit device it's targetted to.

To get clientkey and deviceid, the're 2 ways.

If you have an IRKit device not connected to Wi-Fi and not able to use our official apps (iOS/Android) or SDKs(iOS/Android),
for example if you want to create a SDK for WindowsPhone, use following course.

Get deviceid.
If optionally provide clientkey request parameter, provided clientkey and deviceid's relationship will be saved on server.

Get latest received IR signal.
This request is a long polling request.
Provide clear=1 parameter to clear IR signal receive buffer on server.
When IRKit device receives an IR signal, device sends it over to our server on Internet, and server passes it over as response.
Server will respond with an empty response after timeout.

When you want to receive an IR signal, 1st request should add clear=1 parameter, and following requests after timeout should not.

Use deviceid and hostname in response to distinguish which IRKit device received the IR signal in response.

This request is a long polling request.
Our server on Internet will immediately respond when server confirms IRKit is connected,
otherwise you'll receive an empty response after timeout.